A few years ago, we had a serious shoe storage problem.  Between all 4 of us, we must own over 30 pairs of shoes.  And most of them were in the hall.  In desperation I had put about half of them in a couple of Really Useful Boxes (my favourite storage boxes) to be accessed as needed.  Of course this did not look good and the shoes were not put back in again once used.

I researched shoe storage on the Internet and have found that there were loads of options available from cheap shoe racks to high tech wall hanging shoe cupboards.  However finding something that was sturdy, not too expensive, fitted into our hall as well as with the overall look of the house and was able to store more than 10 pairs of shoes proved difficult.

So I  decided to regroup and tackle the problem one step at a time.  It occurred to me that I was the only one of the family who had room in their wardrobe to store shoes. Therefore, if I could find a way of getting some of my shoes upstairs, there would at least be slightly less to deal with! Years ago, I invested in plastic shoe storage boxes that were all the rage in the heyday of shows like Changing Rooms.  The only trouble was that I never did add polaroid photographs of the contents so finding a specific pair of shoes was always a bit of a chore and, as with my temporary storage solution above, I found that it was always more of an effort to put the shoes back than take them out.  Not only that, but I found that shoes that were only worn during one season such as Summer sandals invariably had to have mould washed off them before use each year. We do have a damp problem with our wardrobes which I control successfully with hanging dehumidifiers but shoes need air. A few years ago, I decided to try use the original cardboard shoe boxes which worked better but was still not ideal.  Paper attracts moisture so the shoes were ok but the boxes always felt dampish. Not nice.

I ordered a shoe rack from Amazon and my lovely son put it together for me.(I probably could have done it but he is really good at self-assembly!). I went to my wardrobe and took everything off the floor.  It was a good opportunity to have a general clearout.  First to go were the jumble of plastic boxes (mostly empty owing to a big shoe clearout about 18 months ago) and old cardboard shoe boxes.  Then I decided to get rid of some posh sandals that I never wear, old clothes I kept for decorating but haven’t used for years and some books I purchased as gifts but then decided were unsuitable.  Once everything was out, I cleaned the wardrobe floor and then put in my new shoe rack.  It looks soooooo  much better than the boxes. I wish I had taken a before and after photograph but never mind.  Here is the shoe rack in all its glory.  What I also like is that it is a simple solution which Is what I prefer – no polaroids, no stacking, just easy.  Best of all, I was able to remove all my shoes from the hall so there were  a few less pairs to store there. 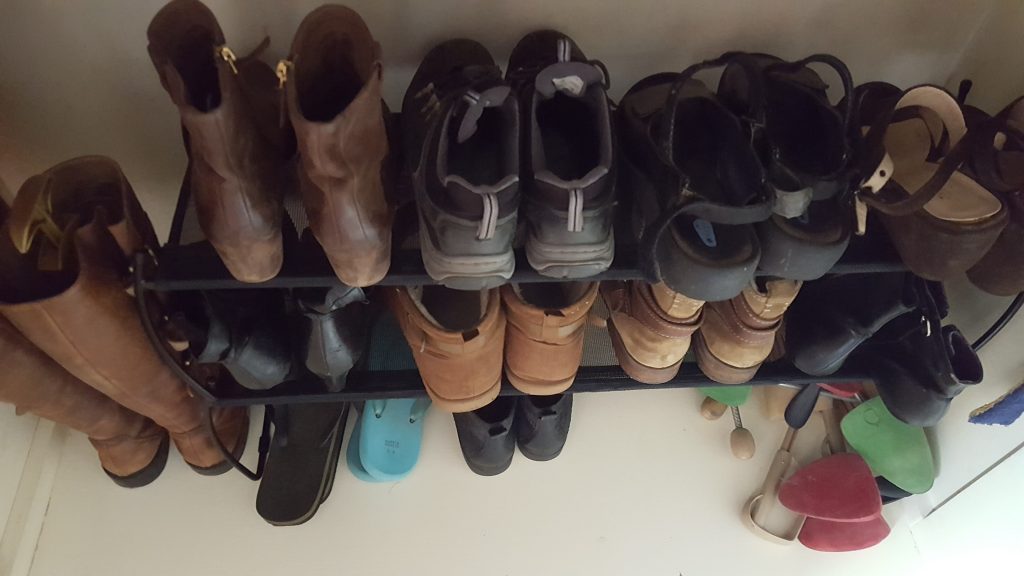 Tidy shoes in my wardrobe

Next step was to tackle everyone else’s shoes!!!

Tweet
This entry was posted in Decluttering. Bookmark the permalink.